Yesterday, I spent nearly a full day on planes and in airports.  I started bright and early checking in at Dulles in DC. I got to experience my first post 9-11 TSA checkpoint and it went quite smoothly. I took a small commuter from DC to New York, seated next to a friendly, but unintelligible old man. We landed in JFK in NYC, where I had to meet my flight to Tokyo. JFK was my least favorite of the airports I came through. Trying to find which gate I needed to be at became a chore, and the people I asked were helpful, but not terribly specific. Eventually, I got it figured out. I also managed to find me a smoothie and a muffin to munch on while I waited.

14 hours is a long time to be on an airplane. The flight took me over Canada and Alaska, before circling down to Tokyo.  A tasty lunch/dinner was served relatively quickly after we got into the air. A fried porkchop and rice, some fruit, and noodles, and some soup. Shortly thereafter dessert came in the form of a Haagen Dazs single-serve cup. The plane had almost everything I could ask for. A personal screen provided flight information, free movies, and a decent Tetris game. There was also a power outlet, which gave me time to get a couple things done, as well as play some Minecraft. I wasn’t able to sleep but a couple hours, unfortunately. I made up for it by watching about every movie that I wanted to see on their programming list. I’ve now caught up on Skyfall, Rise of the Guardians, and Life of Pi. All three were a good watch. I also managed to do a little drawing in my sketchbook. Breakfast was served as well- A cheese omelette with potatoes and a grey mystery sausage. Surprisingly tasty. Everyone was quite friendly as well, but the gentleman next to me, if he spoke english at all, certainly wasn’t the chatty type.

Finally made it to Narita International in Tokyo, where I had to go through customs and immigration. Piece of cake. I think I waited longer for security in the States. Found my gate with little confusion, and caught my final flight to Osaka. It was quick and uneventful. Spent some time writing my never-gonna-happen comic book some more. I was greeted at the exit by Rachel and Evan, and we shoved off for the Kishibe Station Hotel. A quick bus ride, followed by a a train got us there with only the confusion that would be expected by two non-native speakers and their has-trouble-with-his-own-language guest.

So I finally made it! Tomorrow we begin our touristy adventures in Osaka! I’m going to go catch up on sleep! 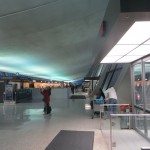 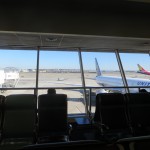 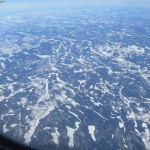 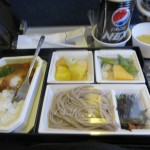 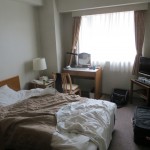 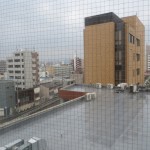 One Response to “There’s Something On The Wing!”