Today was our last day on the mainland. It was also the windiest day I’ve experienced in a long while.

We started out at the Excelsior cafe again this morning. I opted for a hot ham and cheese wrap thingy that tasted remarkably like a hot pocket. To drink, an almond caramel latte. After finishing up there, we headed out to catch a train over to the Kanayama shrine.

Our last planned activity was to attend the Kanamara Matsuri. In English, that’s the Festival of the Steel Phallus. A wondrous celebration of the male organ, it’s also a major tourist attraction. The number of foreigners matched, if not outweighed the presence of locals at the shrine. The place was packed, wall to wall. It was an ordeal even to move from stall to stall. There were stands selling all kinds of trinkets and foods, all of which fit the theme of the festival. Of particular note were the novelty noses, wood carvings, and the wide variety of penis shaped lollipops. We wandered about, ever so slowly, checking out the giant penis statues on portable shrines. There was also a performer with a monkey. Might have been a macaque, but I couldn’t say for sure. The poor thing did not look like he wanted to perform, but eventually went through his routine. There was also a band of percussionists, accompanied by a flute. At noon, the parade began. Participants marched the portable shrines out of Kanayama and down the street, followed by a huge crowd of other people. I lost Evan and Rachel for a moment so I chose a corner and relaxed. I enjoyed a bit of people-watching, including an officer losing his hat in the wind. Once everything cooled off a bit, they gave me a ring on the phone they lent me, and we met up again.

We walked back toward the hotel rather than taking the train. We got a different view, and avoided the crowds. We ended up stopping in a Mos Burger for lunch, and I got to taste my first melon soda. I was NOT disappointed! I chose a fied fish and shrimp sandwich, which was mighty tasty and puts any american chain fillet o’ fish to shame.

We decided to head back into Tokyo, in an attempt to check out the Ghibli museum- a suggestion from Cori. Unfortunately, we found ourselves unable to enter. They had sold out for the day. Not to be discouraged, we walked through the gorgeous Inokashira park. I wandered off a bit while the others rested, and then caught up via phone again. It was really quite a beautiful park, albiet a little muddy from rain earlier in the week.

After weaving through the park, we headed to a big commercial strip to find dinner. We settled on The Hub. A chain of British-style Pubs. I snagged some acai/pineapple juice and the fish and chips. The food was pretty tasty, and seemed surprisingly authentic, right down to an imported malt vinegar. The decor, I believe, nailed the feeling, though the pop music from the speakers and WWE on the television seemed to miss the mark.

After dinner we hopped back on the train to head home. It was a rather long ride, but I managed to pass the time with my sketchbook. It’s surprisingly easy to draw on a moving train. I’m a little red from the sun, and definitely tired, but it’s been a wonderful day.

Tomorrow, we’ll be flying to Okinawa, where I’ll be staying with Rachel and Evan and exploring the island they call home. 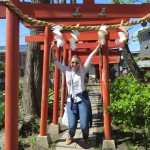 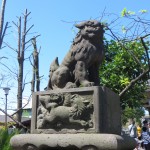 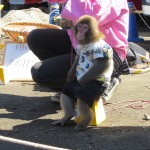 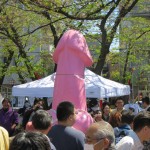 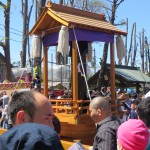 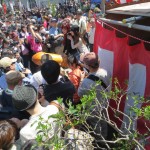 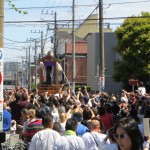 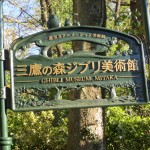