So today was reserved for our travels between the mainland and Okinawa.

We headed out to snag a quick breakfast. There was a lovely bakery down the street from the hotel that we had passed several times. We made it a point to stop there today. I snagged myself a killer ham, spinach, and cheese flaky roll thingy, and a cream-filled doughnut that was way scrumptious. Sipped on an unimpressive but still tasty cafe mocha. We headed back to the hotel to grab our things and check out.

We hopped a train and rode out to Narita airport. It took a couple hours with one transfer, but we arrived on time at the airport and progressed through check-in and security. We wandered the shopping and restaurants in the airport, finally stopping and grabbing a snack. I found a strawberry cake and grabbed some melon soda. I’m going to have to get my fill of that stuff before I head home. Else I need to figure out how to get it in the ‘States. We headed down to the gate and caught our plane without incident. The bus between the terminal and the plane was totally named Airport Limousine. I didn’t feel quite as luxurious as the name implied.

We flew out, and I settled into playing some Monster Rancher on my gameboy. Coming in to the airport, there wasn’t much to see out the window. Apparently, I was on the wrong side of the plane. Peeking out the other side, I could catch glimpses of the island. We left the airport behind and were met by Reis in Evan’s minivan. We headed out to grab some dinner at the Garlic House. Essentially, if it can be cooked in and/or with garlic, this place had it on the menu. We had some pasta in a garlic sauce, garlic pizza, spinach and bacon cooked in garlic butter. We also snagged some spicy chicken and some huge gyoza.

After dinner, we headed to the base where we had to get me a visitors pass so I could come through security. We dropped by the store to get some food for breakfast, then headed to Rachel and Evan’s place. We were greeted by an enthusiastic puppy dog, and a cat who was as happy as a cat ever is to see people.

Tomorrow I get my first taste of Okinawa! 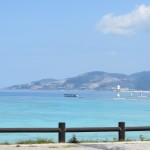 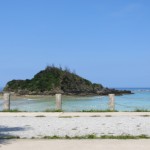 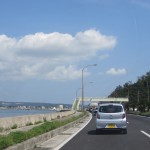