So today, Evan and Rachel both had to work. The plan was that I’d be at the beach because the weather was supposed to clear up and be beautiful.

Evan and I got an early start, and we went over to Casa for breakfast. I got me a killer plate of french toast, eggs, and bacon. We chatted for a while before Evan had to get moving. He dropped me at Climax Coffee, which is right across from the beach. I grabbed myself some blackberry juice there and sat in the corner, drawing and sipping my juice. It was still raining.

I watched the military wives with their children flow and ebb. At one point it got busy enough that I settled my tab and picked a seat out of the way so my table would be free. I don’t like to be in the way. I made a list of things to do when I get home. It was still raining.

About noon the rain had subsided enough and I had finished the drawing I was working on. I ventured out the door and down to Araha beach. There was still a little drizzle falling, so I set up camp on a stool at a covered table. I set my things down, pulled my ukulele out of the case, and played songs for myself while watching a wake boarder jump around. After a while, the rain stopped. I decided to take the opportunity to walk the sea wall and see if there was anything going on. Along one part of the wall, there was a series of intricate graffiti pieces. I walked along the rocks and snapped a few pictures of my favorites. It’s really a style I’d love to learn how to do. After walking the length of the available seawall, I settled back into place at Araha and played some more ukulele. About this time, Evan called. He was going to pick me up and we were heading to Maeda Point for some snorkeling.

This was my first time snorkeling. You know, aside from being a 5 year old with a snorkel in the bathtub. We arrived, parked, and I began donning the rental gear Evan brought for me. This was also my first wetsuit experience. Once I was properly insulated, we headed down the narrow steps to the water. The last few steps were carved out of the coral-rock that we were descending. Pretty cool. Once we were in the waist-deep water at the edge, we slipped on our flippers and Evan gave me a brief primer so, you know, I don’t drown myself. After that, we shot away into the calm, blue waters. It was still overcast, so we didn’t have a lot of light filtering down. We probably could have seen much further if it was. It was still gorgeous. There were fish everywhere, eyeing us in hopes that we had brought food for them. Apparently, that’s their association with people here, as there’s no fishing of any sort in the area. They’d swim up and circle us, follow us as we swam. We saw all sorts of reef dwellers and corals. After rounding the area, my lungs had about had it. The lack of exercise, tight wetsuit, and breathing through a tube were all conspiring against me. We headed back in, de-suited, and headed back to base.

We got some quick showers, and Evan grilled some hot dogs for dinner. We didn’t linger too long before heading over to the Big Dip/Blue Seal ice cream shop. We met Evan’s former coworker Brad there. We were supposed to have one or two more, but they were unable to join. The shop offers what they refer to as the mountain- a 32 scoop sundae featuring every flavor on the menu. Unfortunately, with just the four of us, we weren’t going to eat that. We settled for the little mountain- Probably about half the scoops, and each scoop was about half the size of a normal one. Still plenty to get a taste of their offerings. We shared the micro-beast, and I got to try some other japanese flavors, including the purple sweet potato and brown sugar. The whole thing was mighty tasty.

Afterwards, we headed out to the big ferris wheel in the shopping center across the way. We got our tickets and enjoyed the 15 minute ride around the wheel. I snagged a few shots from the top, but the reflections of the neon and dirty, scratched windows made it a bit hard. Still, I could see the lights of the city for a few miles, and it was a lovely night.

Once we were done on the wheel, we dropped in the arcade by the exit and played a round of air hockey. Evan and Rachel vs. Brad and myself. Evan and Rachel won. But It was a close match! After a lovely evening, we headed out and parted ways. I had to get home to blog and pack my things.

I’m headed home tomorrow. Another long flight is ahead of me, but it’s with ANA, so it should be a pleasant journey. Be home soon! 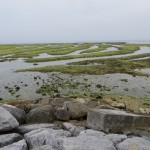 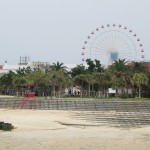 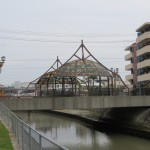 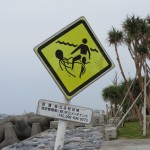 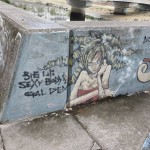 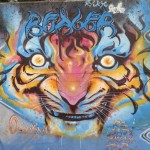 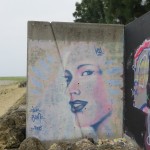 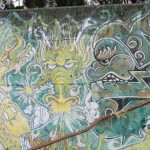 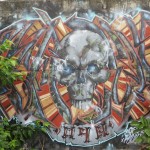 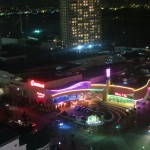 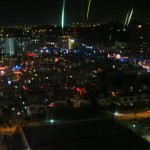 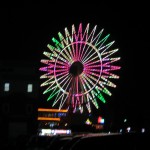